£10.00
More than 50 Available
ISBN
MNLR0138
Add to Wish List
New Left Review 138 November December 2022 is available to buy in increments of 1
Skip to the end of the images gallery 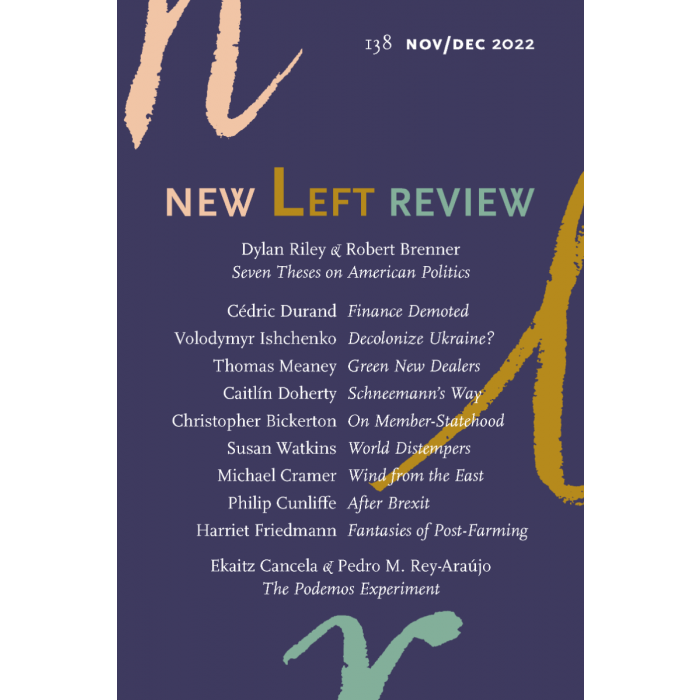 ARTICLES
Dylan Riley & Robert BrennerSeven Theses on American Politics
Bidenism analysed as the outcome of a bipartisan lurch towards growthless Keynesianism, in a new stage of capitalist accumulation emerging from the long downturn. Classes—and class politics—redefined in a strikingly original intervention.

Volodymyr IshchenkoUkrainian Voices?
Ishchenko explores the paradoxes of a politics of national-identity recognition in the absence of national-economic redistribution. What does it mean to ‘decolonize Ukraine’ in neoliberal times?

Cédric DurandThe End of Financial Hegemony?
The 2022 upsurge in inflation read as the birth pangs of a new macroeconomic regime, involving the relative demotion of finance and unravelling of over-accumulated fictitious capital. But finance is a master blackmailer, Durand warns, and may slow the devaluation of financial assets to a crawl.

Philip CunliffeThe Meanings of Brexit
There has been remarkably little discussion of what Brexit means in theoretical terms for attempts to understand the limits of present-day national sovereignty and the character of the EU. In the first of two contributions on these questions, Cunliffe asks why UK politics has changed so little since ‘taking back control’.

Christopher BickertonThinking Like a Member-State
In the second of two pieces on the meanings of Brexit, Bickerton examines the outcomes of the UK’s 2016–20 upheaval through the concept of the ‘member-state’, its elites tied to transnational regimes, while a void gapes between politicians and voters. Even after quitting the EU, does Britain remain a ‘member’ in this sense?

Thomas MeaneyFortunes of the Green New Deal
Comparative assessment of the literature of GND-ology—policy proposal, political strategy and polemic—in light of Biden’s Inflation Reduction Act. What is the political import of this impoverished descendant of the GND imaginary, and how might eco-strategy need to reconfigure itself in the new conjuncture?

Caitlín DohertyBetween Ego and Libido
Appraisal of the feminist artmaking of Carolee Schneemann, occasioned by a Barbican retrospective. From painting and performance; inversions of the male gaze; narcissism as practice. How might the female artist synthesize her status as image with the position of image maker?

Ekaitz Cancela & Pedro M. Rey-AraújoLessons of the Podemos Experiment
A decade after the 15-M movement, how to assess Podemos’s strategy and the ‘populist hypothesis’ on which it was based? After three years in government with the Spanish Socialists, a political and intellectual balance sheet from two participants.

FARMING FUTURES
Harriet Friedmann on George Monbiot, Regenesis. Radical proposals for the future of food and the end of farming as we know it.