Road to Repeal: 50 Years of Struggle in Ireland for 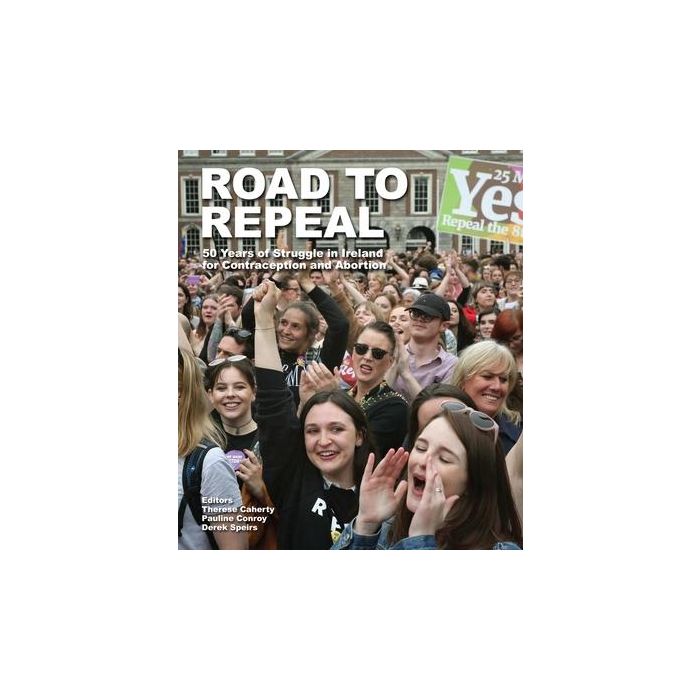 15 SEPTEMBER 2022 SOCIAL AND CULTURAL HISTORY, POLITICS, PHOTOGRAPHY
ABOUT THE BOOK
Road to Repeal: 50 Years of Struggle in Ireland for Contraception and Abortion opens in 1970 when the Irish Women's Liberation Movement burst onto the streets and screens of a society bewildered by women demanding equal status in the home and in the workplace. It tracks the bitter backlash to their successes that culminated in the Eighth Amendment's fixture in the Irish Constitution in 1983. Over five decades, Road to Repeal describes and depicts individual tragedy, referendums, court cases, the actions of a misogynist Church and State. It shines a light on the journey of thousands of women and girls who braved stigma and hardship, often travelling alone and anonymously for medical treatment they were denied in Ireland. Road to Repeal closes with the visually dazzling Together For Yes campaign whose determination and grit finally got rid of Article 40.3.3 on May 23rd, 2018.

ABOUT THE EDITORS
Therese Caherty is a journalist, trade unionist and feminist writer who engaged in the major turning points in reproductive rights campaigns in recent years. She was assistant editor in women's publisher Attic Press. She is a former member of the Irish Executive and Equality Councils of the National Union of Journalists and NUJ rep for the Irish Congress of Trade Unions Women's Committee. She co-founded and chaired the Irish Women Workers Commemorative Committee, and the
Trade Union Campaign to Repeal the 8th Amendment.
Pauline Conroy is a social scientist, policy analyst and author who has published extensively on reproductive rights since the 1980s. Her publications on gender themes, poverty issues and reproductive rights have been published worldwide. She has been an expert in social policy with the European Commission, the Council of Europe and the International Labour Organisation. Pauline was co-editor of Gender in Irish Society in 1987 with Galway University Press. In 2018 she authored A Bit Different - Disability in Ireland with Orpen Press.
Derek Speirs has been described as "Ireland's most renowned photographer of social scenes and social issues" by Fr Peter McVerry. He has been widely exhibited, most recently at the Galerie Dezernat5 as part of the Filmkunstfest in Schwerin in Germany. His photo publications have been widely acclaimed such as Pavee Pictures and 30 Years of Pavee Point. He cooperated with Gene Kerrigan in Goodbye to All That, a publication addressing Ireland and the career of politician Charles Haughey.
"Road to Repeal is a splendid production, both visually and in textual con­ tent. There is a terrific balance between the vibrant images and the really informative text:' CATRIONA CROWE, archivist and broadcaster
"This powerful book is a memento of what it was like to grow up in a theocracy and a monument to
the courage of the citizenry who organised and fought for bodily autonomy over decades, across
generations, classes, and genders:' PAULA MEEHAN, poet.