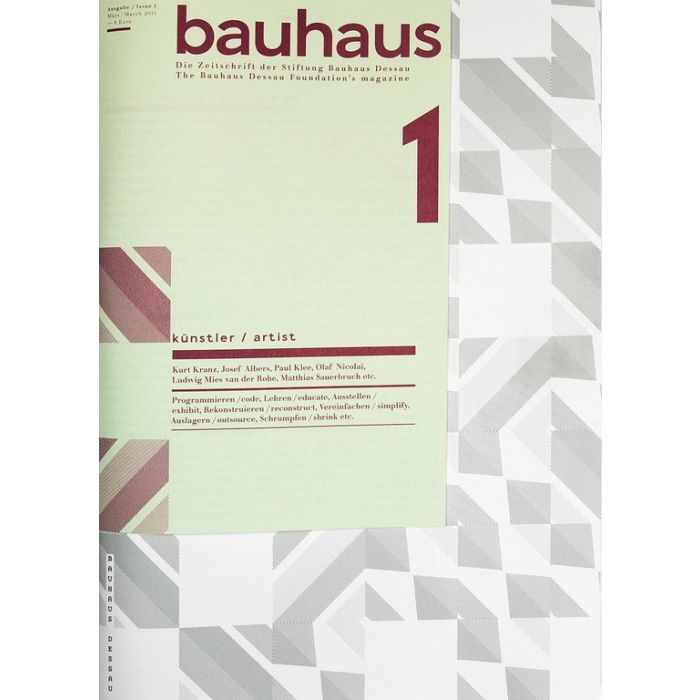 The first issue of the bauhaus magazine was published in December 1926 to coincide with the opening of the Bauhaus building in Dessau. Every three months (with interruptions), it reported on events in Dessau and important modern trends. Walter Gropius, László Moholy-Nagy, Ernst Kallai and Hannes Meyer contributed to the magazine as editors. The authors included Paul Klee, Wassily Kandinsky, Marcel Breuer, Ludwig Hilberseimer and many others. The last issue was published in 1931.

80 years after the discontinuation of this periodical, we, as the Bauhaus Dessau Foundation, are publishing a new magazine under the old name. In doing so, we by no means presume to replicate an interrupted tradition. The Bauhaus Dessau Foundation is not resuming the unique historical experiment of the “Bauhaus”. Nonetheless, it does work at the same place – the Bauhaus building in Dessau – and its remit is to cultivate the legacy of the historic Bauhaus and, “given the ideas and approaches of the historic Bauhaus, to address issues of design in the present-day environment” (the Foundation’s statute). The biannual magazine aims to report and comment on the activities of the Foundation and its partners. It will thereby not only focus on activities in Dessau, but also on those of an international network exploring issues of design. This issue of the magazine will delve into the history of modernity and its relevance to us today.

The editors will select a main theme for each issue, which refers to one of the Foundation’s bigger projects. The first issue is dedicated to the artist Kurt Kranz and marks the exhibition “Kurt Kranz: Programming Beauty”, which is one of the Foundation’s biggest art exhibitions in ten years. The main theme facilitates the presentation of diverse projects in a contentual context. In the process, we will always endeavour to forge a link between historical positions and contemporary issues. Modernity itself became history long ago, and only by reflecting critically on one’s own history can this be seminally updated. The thematic spectrum is a broad as the Foundation’s own work and encompasses all design disciplines – from the visual and performing arts, graphic design and product design, to architecture and urban development.

The magazine itself aspires to provide a platform for contemporary graphic design. Every year, the Foundation, together with external jurors, will choose a new graphic designer for the year, each of whom will design two issues of the magazine (as well as additional products). The first will be the Novamondo agency of Berlin. Our aim thereby is to carry the diversity of the Bauhaus legacy forward into the present day in a new form. Each time, after two issues, the magazine will appear in a completely new guise, thus in itself becoming part of the research into current positions in design.